Karl Bushby: The Man Who Chose To Walk Around The World

Whatever long walk you had before in your life, it would literally be considered a walk in the park compared to Karl Bushby’s super long, lengthy and continued walk. This walk started on the 1st of November, 1998. Bushby began a journey from the southern tip of South America to his home in Britain for the sake of proving that it is possible to complete an unbroken path around the world, in addition to a number of personal reasons .

Without using any type of transportation but his feet, he will be walking 36,000-miles during his quest to reach his home in Hull, England from Punta Arenas, Chile. He already made a new record by proving to the world that it is possible for a human to cross the Bering Strait from Alaska to Russia.

Karl follows two important rules: Never use any type of transportation to take him from one place to the other and never go back to his home in the UK until he finishes his walk. He recently managed to get a Russian visa after intentionally walking the wrong way from Los Angeles to the Russian embassy in Washington D.C, as he was struck by a five year ban from entering the country. Luckily he was able to continue this heroic trip. 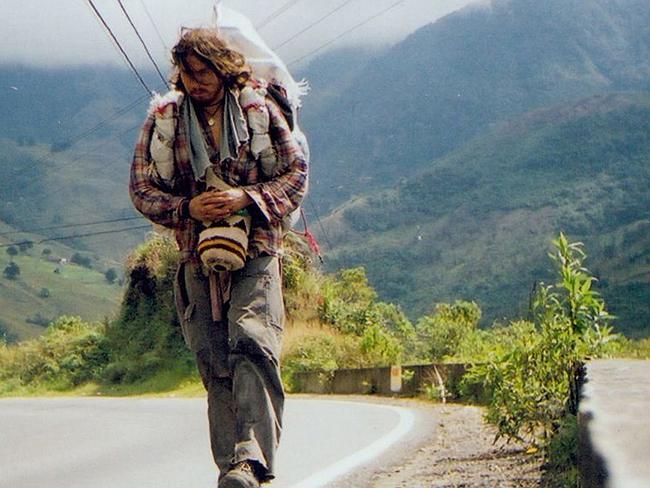 Reading about Bushby’s story, you’ll try to just imagine all the obstacles he faced during his walk and you will never be able to understand how someone can overcome such incredibly harsh conditions while being able to resist the urge to take a plane back home. Going alone to the UK from South America without using any type of transportation available, what kind of a strong, bold and insane man would do such a thing? “How such an idea came into being, I guess that was part of my immediate culture or environment,” This is how he describes the reasons that drove him to this point.

Being a Paratrooper when he was young, competitiveness was always around the corner, which affected his personality greatly. Wanderlust plays an important role in taking this decision too. In addition to his environment and past history which includes a diagnosis of dyslexia when he was 15 and being the son of a decorated Special Air Services officer. One should also put in mind the failure of his marriage after spending 12 years in the military and its relation to his ultimate walk.

This unique equation led to the formation of Karl Bushby’s unusual decision of walking around the world. Yet, everyone can easily change his motivations as time passes, so we probably need to ask him after 17 years and thousands of craggy and hard miles, did his reasons change? 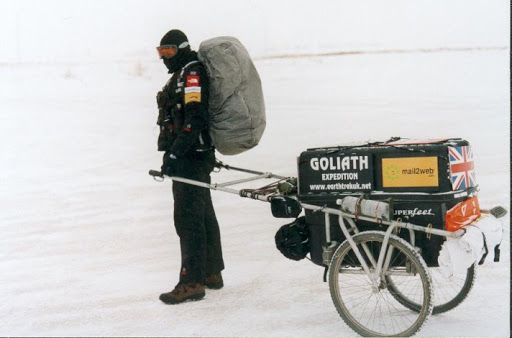 The Day He Had to Stop

Reading his story and knowing about his route, you can easily count the number of grim days he had alone. From starving to death in Patagonia to losing sponsors after the financial crisis in 2008 and going through the “Road of Bones” where the ground will literally freeze after four feets or more, plus getting a five years visa ban from the Russian government because of bureaucracy, which was a scary deadlock for his journey. Still, the worst day for him is not a bit related to all that.

“It was all about a woman, what else could bring a man to his knees?”. The woman which Karl genuinely describes as his soul mate, unexpectedly visited his thoughts on a cold winter night, nine years after he left her behind in Colombia. This was the only day he was not able to get out of his tent and carry on with his mission. The terror about this relationship died two years after this day and so died everything linked to this relationship. 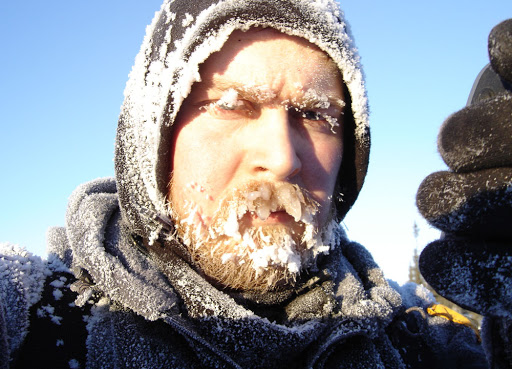 We always notice how traveling changes us for better every time, specially If you are solo travelling or you’re doing an unusual activity while you’re in another country way far from your comfort zone. Climbing a mountain for example. As expected, Karl’s expedition changed him in so many ways that he could never have imagined. He now achieved so much that he realized his own potentials and got an inner strength boost that is helping him become more self-confidence.

Karl talks about breaking his stereotypes and changing preconceived ideas about certain countries because of his walk. “Countries more known in the media for danger, intolerance and terrorism. But, without exception, my encounters on the road made me realise that the vast majority of people in the world are good people,” He happily now thinks that the world consists of mostly good people who are ready to help anyone and very few evil citizens of the world.

To his surprise, his body actually did not fall apart after thousands and thousands of miles, except for his toenails which were falling one week after he started. This also made him amazed by how powerful the human body is and how essential it is to treat our bodies in a decent way to expect more endurance.

Since this mission is taking a big part of his life, Karl had to be away while his son, Adam, grew up. He left his only child while he was only five years old. Now 24-years-old Adam, decided to join his father for two weeks. This happened when Karl was doing a 3000 thousand miles walk from Los Angeles to Washington D.C hoping to convince the Russian embassy that he should get a visa. It was an important part of his journey and the first time both of them got to actually talk and know about each other.

This is how much he had to sacrifice. Leaving his only son when he was just five and not being able to watch him grow up like any other normal father. He also sacrificed a father/son relationship that may never be restored. “Out of everyone I knew in this world, I knew my son least of all.” Karl didn’t have any means of communication with his son for years but managed to reach him after contacting one of his friends on Facebook. While he was away, his son was suffering from depression and self abuse and had to use medication and therapy.

Whether we agree with what Karl is doing or not we have to acknowledge that Karl is no ordinary man. That brings us to the point which everyone’s world revolves around, happiness. Doing what you love and sticking to it no matter what, because you know that that is your number one sort of delight in the world.

Studying this man’s case can provide a lifetime supply of motivation and free lessons on how to keep moving towards your happiness and life goals when the world is pushing you to stop. How to keep moving when your toenails are falling off, when you’re starving to death, when you’re in the middle of a deadly sand storm in Peru or when you are jailed for 71 days in two different countries. 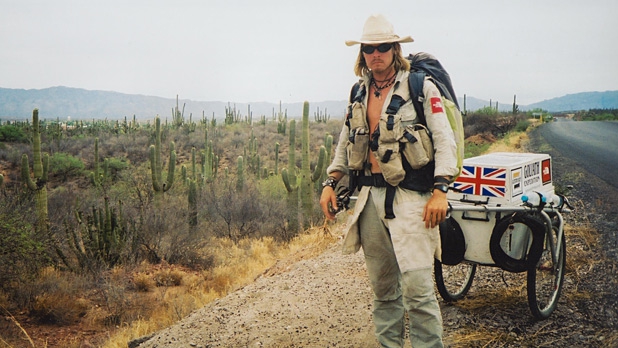 Abdelrahman Amr A marketer who writers for the Refuga Content Team from Cairo, Egypt. Always aspiring to do more as long as it is something related to traveling, writing, entrepreneurship and football. Find me on Twitter: @AbdelrahmanAmr

5 responses to “Karl Bushby: The Man Who Chose To Walk Around The World”